Big news has come out about old Rs 100, 10 and 5 notes. The Reserve Bank of India has informed that these notes may be closed soon. 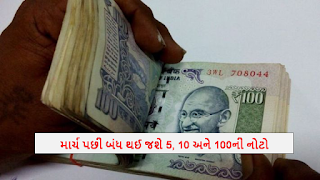 According to the information received, all these old notes may be closed after March. The RBI said old Rs 100 and Rs 10 notes would not be in circulation from March. According to sources, RBI official B Mahesh said the RBI was working on a plan to close the series of old notes.

This was stated by RBI Assistant General Manager B Mahesh at a meeting of the District Level Security Committee. In fact

The Reserve Bank is considering withdrawing old Rs 5, 10 and 100 notes. If all goes well, it could be announced in March and April. New notes of Rs. 5, 10 and 100 have already come into circulation.

The general public will not be bothered

Let me tell you, the Bank of India said that people were very upset at the time of the ban. So this time the RBI will ensure that as many old notes as are in circulation come into the market. So that no one is bothered and this series is not abruptly stopped.

The new 100 rupee note is already in circulation. It was introduced by RBI in 2019. All Rs 100 notes issued earlier will also continue as legal tender. Apart from this, on November 8, 2016, after the ban, the central bank issued Rs 2,000 notes in addition to Rs 200 notes.

The decision will be taken to curb fake currency

Let me tell you, RBI periodically closes old notes and introduces new ones. The decision has been taken by the RBI to curb counterfeit notes. All old notes closed after official announcement have to be deposited in the bank.