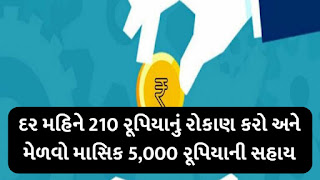 Atal Pension Yojana, formerly known as Swavalamban Yojana is a government-backed pension scheme in India, primarily targeted at the unorganised sector. It was mentioned in the 2015 Budget speech by the then Finance Minister Arun Jaitley. It was launched by Prime Minister Narendra Modi on 9 May in Kolkata.

They have to go to this website and log in. For which they have to give their PRAN and savings bank account details. If there is no PRAN number then the beneficiary can also login his account through his name, account and date of birth.

Under this scheme, there is also a provision of tax benefit under section 80CCD (1) of the Income-tax Act, 1961. The transaction amount, total holding of member amount, transaction details etc. can also be viewed under Atal Pension Scheme through Umang app.

As you all know, under Atal Pension Scheme, pension is provided to the investor on completion of 60 years of age. People’s interest under Atal Pension Scheme is increasing year by year. The Covid-19 epidemic hit year under this scheme has also seen fantastic enrollment.
Given this nomination, it can be concluded that now the common man has become more concerned about savings schemes and understands the importance of protecting his future. During 2020-21, 52 lakh new investors have so far registered under Atal Pension Yojana. Under which the total enrollment has crossed 2.75 crore till 31st December 2020.

So far more than 40 lakh registrations have been made under Atal Pension Scheme and the total number of shareholders has crossed 2.63 crore. Under this scheme, a person of 18 years and 40 years of age can invest and after completion of 60 years of age of the investor, pension is provided to him. If the shareholder dies before the age of 60, the pension is provided to his spouse. If a person does not have the facility of net banking then soon it will be easier for them to open an account under Atal Pension Scheme.

Earlier this year, the Pension Fund Regulatory and Development Authority has appointed an ombudsman to address the grievances of customers of the National Pension System and Atal Pension Scheme. Any customer whose complaint has not been resolved within 30 days of filing or is not satisfied with the solution provided can lodge a complaint with NPS Trust. The customer will be answered by NPS Trust within 30 days of receiving the complaint and their complaint will be resolved as soon as possible.

Beneficiaries must have a bank account to join Atal Pension Yojana 2021 and the bank account must be linked to the Aadhaar card. People who are income tax payers and have government jobs cannot avail the benefits of this scheme. Anyone who is an interested beneficiary can go to any National Bank of India and open an account of Atal Pension Scheme.

In this scheme, it will be possible to increase or decrease the pension at any time of the year. This new facility will benefit 2.28 crore subscribers registered in Atal Pension Yojana. This new feature has been in effect since July one. PFRDA has directed all banks to process increase or decrease in pension amount at any time of the year. However, this facility can be availed only once in a financial year.

Investment in the plan

The ‘Atal Pension Yojana’ of the Central Government has completed 5 years The scheme is operated by the Pension Fund Regulatory and Development Authority (PFRDA). According to PFRDA, so far 2.23 crore men and women are involved under this scheme Under this Pradhan Mantri Atal Pension Yojana, pension has been provided to women and men above 60 years of age every month for these 5 years every year. | This scheme has proved to be very beneficial for the people of the country. Under this scheme, the male-female ratio has been 57:43 in these five years.

How to apply for Atal Pension Yojana 2021?

The process of downloading the Atal Pension Plan Contribution Chart