CM announces new fire regulation system in the state, new fire NOC will now be available online, people will be relieved of office push, new rules effective from January 26 :
The fire safety plan has to be approved at the time of design-development permission of the building. 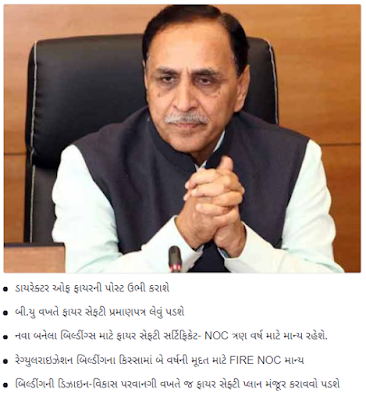 Chief Minister Vijay Rupani has announced a new fire regulation system in the wake of rising fire accidents in the state. The post of Director of Fire will be created, the CM said. As well as to make the fire service more efficient, officers will be appointed in four zones. The new fire service rules will take effect on January 26. Chief Minister Vijay Rupani has taken some important decisions regarding fire safety in the state to protect the lives and property of the people from strict implementation of fire safety. He said that fire safety NOC has been issued for every high-rise building, commercial complex, school, college, hospital and industrial unit in the state. The state government has made an important announcement that it will develop a fire safety cop portal in a transparent manner regarding the procedures for obtaining online.
A panel of private fire safety officers will be formed in the towns and cities :
The state government will allow young engineers to pursue a career in the field of fire service in the state and undergo specific training as a private fire safety officer. A panel of such independent practicing private fire safety officers will be formed in town-metropolises. This decision of the Chief Minister will reduce the existing workload of fire safety, NOC, renewal, etc. in the local system of towns and cities. Not only this, it will be easier for building holders and people to get NOC and renew it. Such a private fire safety officer will be appointed as per the provision of Section-12 of Gujarat Fire Prevention and Life Safety Measures Act-2013.
Six-month renewal services will be faster :
Following this decision of Chief Minister Rupani, a large number of high-rise buildings, commercial complexes, schools-colleges, hospitals, industrial units in the state will get fire NOC and renewal services every six months will be available quickly and without delay. Not only that, such property owners, occupiers will have the option to avail the services of Fire Safety Officer of their choice.
NOC, renewal, online payment and fire safety on fingertip will be available :
The state government has decided to develop a Fire Safety Cop-Fire Safety Compliance Portal to bring transparency so that people do not have to go to the offices to get a Fire NOC. Details including information of new Fire Safety NOC, Renewal, Online Payment and Fire Safety Officer will be easily available on this portal on a fingertip.
The aim is to make the online portal system simpler, simpler, and more uniform and uniform throughout the state.
Fire Safety Certificate for New Building – Valid for 3 years
Online filling forms, applications, certificates have all been simplified so that even the common man can understand and apply on his own. Among the certificates to be obtained, the fire safety certificate for the new building will be valid for 3 years. The renewal certificate will be valid for two years.
The developer must obtain the approval of the fire safety plan at the time of construction permission
According to the Chief Minister, we took an innovative initiative in Gujarat and decided two months ago to make private young engineers and young people who have studied firefighting practice-imperial as fire safety officers after the necessary training in fire safety.
Fire safety begins at the design stage of any building. The developer must obtain the approval of the fire safety plan at the time of construction permission. Fire Safety Certificate will be renewed only after the construction is completed and then the fire safety system will be checked. The certificate must be renewed only after periodic inspection to ensure that the fire system is ineffective condition throughout the lifetime as shown in the original plan of the building.
Full Read Gujarati Divyabhakser News Report: Click Here
Prosecute the owner or builder with a fire safety officer if there is a mistake :
The FSO will conduct a random inspection of the fire NOC renewed by the fire officer to ensure that all safety parameters have been considered before issuing the certificate. If any mistake is found in it, the government will take penalty action against the fire safety officer as well as the honorary builder, the occupier.