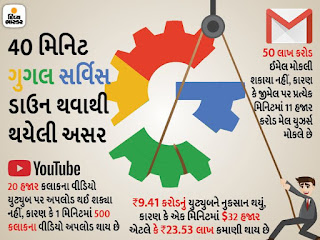 Google, one of the world’s largest tech companies, lost 19 services. Its services were disrupted for 40 minutes. Login and access problems started at 5:26 pm Indian time and re-stored at 6:06 pm. Google has not commented on the issue. Mostly this problem came up on Gmail, Google Drive and YouTube. This caused a lot of trouble for the users.

According to the data, 500 hours of data is uploaded on YouTube in 60 seconds, which means that 20,000 hours of data could not be uploaded in a difficult period of 40 minutes, resulting in a loss of about Rs 9.41 crore. YouTube earns about 32 thousand dollars or about 23.53 lakh rupees per minute.

The service is down

The service was on

About 9,000 cases of users having problems accessing YouTube were found in the down detector. This was also the case with Gmail and YouTube. Complaints of disruption to Google’s service were received not only in Europe but also in Australia, the east coast of the United States and Africa, South America and Asia.

At about 5:26 p.m., an error page appeared on several services, including Google’s Gmail service and Hangout, which lasted until 6:06 p.m.

The service was disrupted

“Many of our users are having problems with the service, which we are aware of. Our team is working to resolve this issue and will be updating soon,” the message said on social media.