Government’s gift to farmers: Central government’s big decision amidst farmers’ agitation, sugarcane growers to get subsidy: The central government has given big gifts to sugarcane growers. The cabinet has decided to provide Rs 3,500 crore export subsidy, Rs 18,000 crore export benefit, and other subsidies to farmers. Union Minister Prakash Javadekar addressed a press conference on the issue. 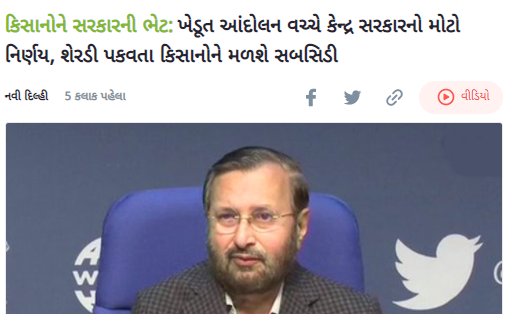 The decision for sugarcane growers amidst the peasant movement: The Union Minister said the government has decided to export 6 million tonnes of sugar this year. On which the subsidy will go directly to the farmers’ account. The government will provide Rs 3,500 crore as subsidy. He said the government’s decision would directly benefit 50 million farmers and 500,000 laborers.
According to Prakash Javadekar, farmers will get a subsidy of up to Rs 5,000 crore within a week. 60 lakh tonnes of sugar will be exported at Rs 6,000 per tonne.
The Modi government has taken this decision for a large number of farmers amid the ongoing farmers’ movement on the issue of agricultural law. The government is constantly trying to persuade farmers on the issue of agricultural law. 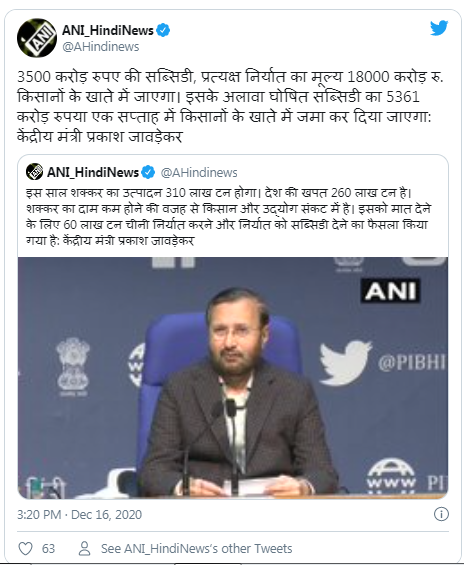 Government towards improving power system: Prakash Javadekar said the new budget has been approved to improve the power system in the Northeast. It used to cost Rs 5,000 crore, but now it will cost Rs 6,700 crore. According to Prakash Javadekar, with its help the transmission line will be extended, the target of 24 hours electricity will be met.
Full Read Divyabhasker News Report: Click Here
Spectrum will be auctioned off: Union Minister Ravi Shankar Prasad said the government has decided to auction the spectrum, which was earlier held in 2016. The government has also decided to form a national committee for the telecom sector.