Some important decisions have been taken in the cabinet meeting held at Gandhinagar today. Out of which Rupani government has approved recruitment of 6616 faculty-teacher assistants in the state. 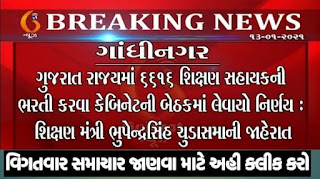 Addressing a press conference, Education Minister Bhupendrasinh Chudasama said that the state government has approved the recruitment of 6616 faculty-teacher assistants in Gujarat. Under this sanction 2307 posts will be filled in the grant aided schools of the state and 3382 teaching assistants will be recruited in the higher secondary schools.

The state will recruit 6616 faculty-teacher assistants :

Appeal to send children to school :

At the same time, the state education minister Bhupendrasinh Chudasama had appealed to send the children to school. He also said that the dates of the exams will be announced in the near future.

Schools have been closed for the past eight months due to the Corona epidemic. The state government has decided to start standard 10 and 12 schools from January 11.